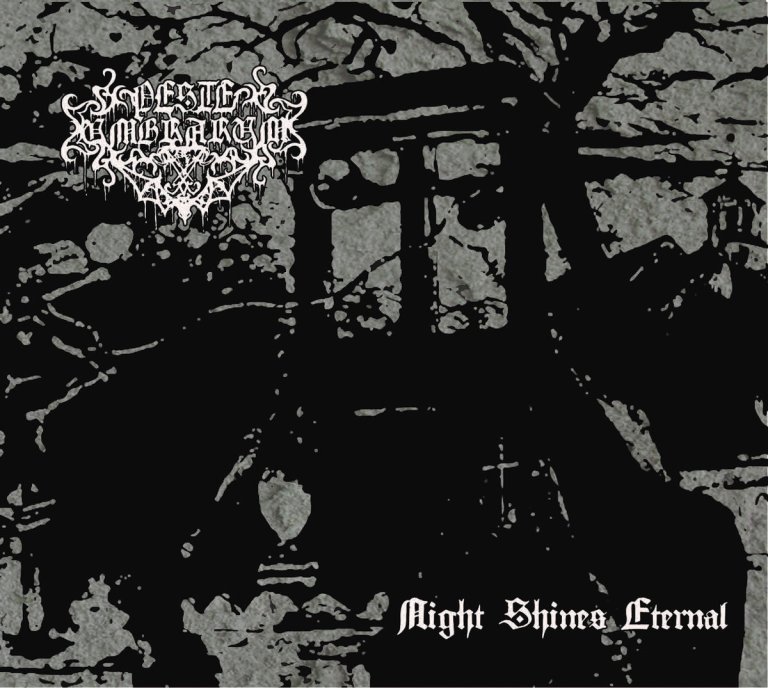 Keeping up with subterranean/unsigned black metal in the current year, there’s such a constant onslaught of releases that sometimes you might fall into a slump and be forgiven for thinking you’re just hearing the same shit over and over again. Don’t get me wrong, being varying degrees of derivative is fine (almost everyone is, really), it’s the spirit and feeling that really matters and some bands have it, some bands don’t – it’s just an unfortunate truth. But sometimes, just sometimes, you might pick up and discover an absolute gem that makes it all far more than worth it. After lying dormant in the cryptal darkness of the BMD inbox for months, when I first pushed play on this little slice of obsidian malignancy I immediately felt more than the oft-apparent potential that a good demo usually emanates… I was immediately transported back to my days of youth in the mid ’90s.

Such is the magic inherent in Night Shines Eternal, the debut demo of vampyric USBM horde Peste Umbrarum. Actively drawing down the moon since 2017, their efforts thus far have coagulated into this one sole release that materialized on the earthly plane in July last year – but what a release it is. Tapping into and subsequently drenched in the arterial spray of the massacres the Finnish scene has left upon the genre, imagine Sargeist et al. imbued with the yearning melancholia and torment of endless millennia past, promising whispers of wretched knowledge and an eternity of solitary pain.

If you think that sounds right up your alley, I daresay it will be. I was that taken by it that I had to reach out for a quick chat with throatsman Cäassimolär; thankfully, he was happy to oblige and provide us with information on the demo, project itself, and sure-to-be-great upcoming full-length. Thus, read on below and listen deeply to these children of the night… what sweet music they make. 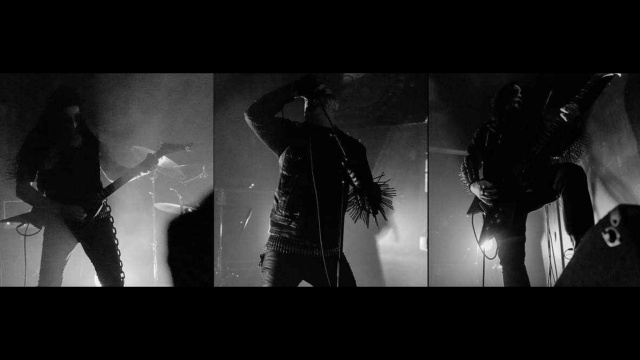 Hails Peste Umbrarum! I’ve recently discovered and become enthralled by your 2018 demo Night Shines Eternal. You have a sound as ancient as time, yet you formed in 2017. Who are you, and how did Peste Umbrarum come into existence?

– Ave BMD! And thanks for the commendations! As of the moment the project consists of Cäassimolär/ vocals, Lord Andross/ bass & keys and Tenebrion/ guitars. We are currently in search of a new permanent drummer and have incorporated a live second guitarist in Obskuritas.

The concept began in mid 2017 out of the ashes of Daemoniis ad Noctum and the defunction of black/ doom band Hiding with a combined yearning {along with members of Panzergod) to express a more mournful medieval romanticism in the traditional black metal sonic spectrum. After a few setbacks, we were able to bring the project into fruition very late in 2017.

The demo was originally released in July last year. With so much time having passed to reflect on it, how do you view it now?

– Yes, it was a July release on the digital version with a physical release in digipak CD by the band in September of 2018 (which we have only a few left).

As far as our opinion on it, the whole thing was recorded and mixed by the band with some rush that we weren’t prepared for. Inexperience in the mixing process shines through a little bit and the mastering is shit. However, we do feel as though it was a good basic representation of the potential that exists within the project and has given us a platform to build upon along with something for the fans. Some of the songs have been rebuilt and will be re-recorded to appear on the full length coming out later in 2019.

I’ve seen that the lyrical themes on the demo apparently deal in literature. I’ve not had the opportunity to read them myself, but I’m intrigued – could you elaborate on the literary themes present?

– I, Cäassimolär, have always been fascinated with gothic & horror literature, film and aesthetics. Of course the staples e.g.; Shelley, Poe, Stoker, Fanu, Lovecraft, Howard, Radcliffe, etc. have a huge influence in the lyrics but there are also more contemporary dark gests and authors that have a place in newer writings. These themes, I feel, really shine through in our live performances as well.

The demo apparently also touches on occultism. Do you consider yourselves practitioners of any particular path?

– Different forms of the occult will always have a place in our lives and art, specifically Luciferianism. If there is a collective path we as a band are on, I would have to say the majority of our spiritual power comes from the morning star, the moon, worship / respect of death & nature, vampirism and the ongoing war against most monotheistic religions. So yes, predominantly Luciferian, but always exploring and expanding within the infernal streams of forbidden knowledge.

Although Night Shines Eternal resoundingly achieves your own cold, crepuscular vision, many different influences from the annals of black metal can still be heard – your art is heavily steeped in tradition. Have you drawn inspiration from or feel a kinship with any past artists in particular? Does modern black metal interest you at all?

– There are many genres and bands affluent in our writing that are intentional and some that are not… As we began Peste Umbrarum, we had really drawn inspiration from Swedish bands like Avsky, LLN bands and Celstia of the 90’s French scene mixed with the Russian tonality & ambience of the late 90’s/ early 2000’s. What emerged, however, has a bit more of a Finnish BM sound coupled with our own form of romantic audial dissonance.

As for modern Black Metal…meh. There’s good and bad. It’s hard to really boil that down to one general answer.

I believe, in some truly excellent news, that you are also working on an upcoming full-length album. How is that progressing? Can you tell us a little about it, and what we can expect?

– Yes, we are currently in the later part of finishing the writing process on a full-length with the working title Night Canticles of the Ancient Ana’thema that will harbor, as I mentioned earlier, a few of the songs off of the demo in an updated form and 4 or 5 new ones. The album will have an even more noticeable medieval feeling as we bring more Dungeon Synth / Keys courtesy of Lord Andross, riffs of Tenebrion being heavier on the draconian side and I will be adding some ambient pieces along the lines of the intro to ‘Umbrae de Gallows Dolor’ from the demo. We’re planning to start tracking in house late spring or very early summer.

As of yet, you do not appear to have any label backing. Are you intending to remain autonomous, or will you be seeking a suitable home for the release of your next works?

– Ah yes. For the demo we wanted to get something out there ourselves as an entirety. Tracking, mixing, producing and ultimately being self sufficient in the recording process was an intentional learning curve for future albums. As for the physical release, I have a little experience in that department running the Exile Music(k) label for a few years (currently on hiatus), so that presented no problem.

We are currently in talks with underground German label Astral Nightmare Productions to initially release the CD version and are really excited about that considering their past releases by Supplicium, Nattsvargr, Unhuman Disease, Gjaldur etc… are truly exceptional pieces of black metal art. As for future releases and other formats of the upcoming album, we’ll definitely be looking for a label to work with on a permanent basis.

I see you’re no stranger to the live setting, performing recent bloodletting rites to great success. Are there any more live rituals to come that we should know about?

– We have definitely spilled our share of sanguine fluid in past and present bands, which is why, especially as such fans of the genre, we feel it is so necessary to create an all involving presence in our live rituals. We take care to prepare for these dark sacraments, therefore, we only have had a few since our inception. This will be changing not in quality, but in quantity as we release the new recording.

We had our first rite planned this year to be in support of Horna and Cultus Profano as they came to the U.S., however, it seems the current bullshit climate rendered that rescinded. Currently Mysticism Black and Peste Umbrarum are looking to have something come together in Portland to run that loss back as both bands were scheduled for that show. We also are in discussion with a few bands from Seattle to do a leg of their August tour and are looking into a full West Coast tour in the fall after the full-length release.

Sincerest thanks for your time Peste Umbrarum, looking forward to your next album. Any final words for us all? 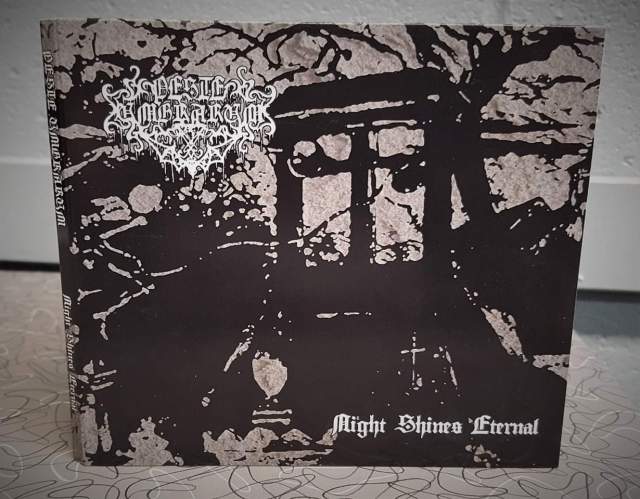 From the Dark Past